Menu
Application to designate the Dorset AONB as a National Park. On behalf of the Purbeck Society, I am pleased to write in support of this application.
NAVITUS BAY WIND FARM PROPOSAL PUBLIC MEETING ARRANGED BY BOURNEMOUTH COUNCILLORS 1.30 PM 23 MARCH 2013 ROYAL BATH HOTEL, BOURNEMOUTH MEETING REPORTcontinue reading →
THE PURBECK SOCIETY www.purbecksociety.co.uk Affiliated to the Campaign to Protect Rural England (CPRE) Chairman : Michael Stollery, Dip Arch, RIBA Please reply to : 52 Victoria Avenue Swanage BH19 1AP Navitus Bay Developments Ltd Units 3&4 Athena Court Tashbrook Park Warwick CV34 6RT Dear Sirs NAVITUS WIND PARK - OBJECTION In response to the Phase Three Community Consultation, The Purbeck Society, after due consideration of the revised proposals, submits its formal objection to them and lists below the reasons for doing so. The Purbeck Society, a community based group with over 350 members,…continue reading →
How do you register your feelings about this windfarm? Some points you may want to cover, in your own words: Embedded in a valuable national asset with an economy supported by its natural beauty & the sea Overlooked by two Areas of Outstanding Natural Beauty and a National Park Close to England’s only natural World Heritage Site Closer than government recommendations for coasts of high sensitivity Closer than similar developments in Europe  In the mouth of a bay rimmed by hills and cliffs  On an important international bird migration route In an area…continue reading → 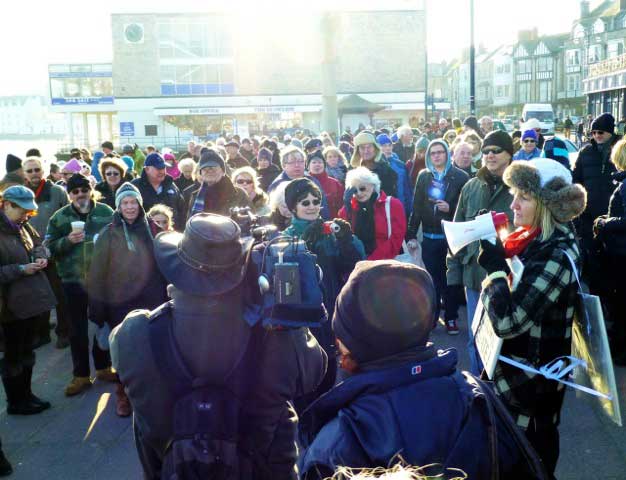 The demo took place on Sunday morning 13th January at 11 am at Swanage. It was well supported and obtained both TV and newspaper coverage. The aim was to keep pressure on Navitus and bring the protest against the windfarm to a wider audience. Bill Trite Swanage Town Council Mayor and Richard Drax (our local MP) attended to give their support. Charlie Sanderson led the protest. As can be seen from the photos we had a good turnout with an estimate of approx 2000 against the proposed windfarm. Friends of the Earth turned…continue reading →
We felt it would be a good idea to provide this update after an active year opposing the wind farm scheme and before the next formal consultation in February. It is being sent to the Residents' Associations (RAs), the HENRA committee, Challenge Navitus (CN), some MPs, councillors and council officers.
Please find attached the minutes from Hengisbury Residents' Association general meeting 7 November 2012. Navitus Bay wind company presentation.continue reading →
These three proposed developments proposed for the Osborne Road/Townsend Road/Cobblers Lane area follow on from that application granted on appeal for PA 6/2010/0302, Land adjacent to Rotary Cottage allowed on Appeal. While these are separate applications, the Society takes the view that the overall impact that the three proposals would have on the area, should be considered in relation to each other, together with that of the earlier, allowed, Rotary Cottage scheme.
Navitus Bay Development Limited (Navitus Bay), the jOint venturebehind the proposed Navitus Bay Wind Park, is announcing today that it has decided to reschedule the third round of public consultation on the project until February 2013. The decision to reschedule the next stage of consultation reflects the high level of attendance and feedback that Navitus Bay received from the local community at the second round of consultation earlier this year. To ensure that the community and technical feedback is given the due consideration it deserves, Navitus Bay has decided to allocate additional time and resources to fu lly explore the comments received and how they can be accommodated in to the proposals, taking into account the complex technical and environmental constraints on the project.
Over the last few years there have been a number of planning applications which have involved the destruction of interesting and characterful properties, the most notable probably being the former Westbury hotel (latterly care home) in Rempstone Road Swanage. The Society is increasingly concerned that the character of Swanage is being steadily eroded by the destruction of such properties and believes that acceptable viable alternatives, whereby these properties can be adapted for 21st Century use, while still retaining their character. The latest case is No.2 Drummond Road in south Swanage which, to our knowledge, has been the subject of three planning applications in recent years. Each of these has involved the demolition of Drummond Lodge, an interesting Edwardian house.