“Over the last few years there have been a number of planning applications which have involved the destruction of interesting and characterful properties, the most notable probably being the former Westbury hotel (latterly care home) in Rempstone Road Swanage.

The Society is increasingly concerned that the character of Swanage is being steadily eroded by the destruction of such properties and believes that acceptable viable alternatives, whereby these properties can be adapted for 21st Century use, while still retaining their character.

The latest case is No.2 Drummond Road in south Swanage which, to our knowledge, has been the subject of three planning applications in recent years. Each of these has involved the demolition of Drummond Lodge, an interesting Edwardian house.

Two applications have been turned down by the PDC Planning Board, upon which the Applicant went to Appeal. The first was refused by the Inspector and the second has recently been withdrawn by the Applicant who has now submitted a new planning application.

The Society’s Icase is that Drummond Lodae should not be demolished, the proposed 5 houses are out of sympathy with the neighbouring properties, the road is unsuitable for this type of development and that the character of the ‘Lanes’ area would be irretrievably spoilt. Our full letter of objection sent to the Planning Authority on 26th September is reproduced below.”

THE PURBECK SOCIETY
www.purbecksociety.co.uk
Affiliated to the Campaign to Protect Rural England (CPRE)

Re 2 Drummond Road Swanage PA 6/2012/0568
Firstly we note that the Appeal to the previous scheme (APP/B1225/A/12/2170054) has been withdrawn and the informal hearing planned for 27th September has been cancelled. We only received the advice yesterday (25th September) by two identical letters addressed to the Society and dated 17th September (why the delay and why two?).
The Purbeck Society remains utterly opposed to this application as well as the previous proposals to demolish the property known as Drummond Lodge, No.2 Drummond Road, Swanage. If there were to be a local list of significant buildings, something for which the Society is campaigning, we would wish this building to be included. Therefore we are fundamentally opposed to any proposal that requires the demolition of this interesting building which is full of character.
We wish to take this opportunity to re-state our opposition to these new proposals and our reasons for doing so, which are basically those recently stated in connection with our opposition to the previous scheme, the subject of the recently withdrawn appeal.

It is the Society’s contention that the development proposed would:

The house itself can be seen from the many parts of the town and is a prominent landmark, appearing on the skyline and seen from the seafront right through to the northern areas of Swanage.

It is a particularly interesting house of the Edwardian period, being very individualistic in character with its battlemented corner bays, balconies and chimneys. Elsewhere in the Appraisal (section 04.11) one of the threats noted is “…the continued loss of quality Edwardian buildings in totality and through the progress loss of details. Loss of front gardens to off street parking…” This is true of many areas of Swanage and these proposals would provide a particular threat to the character of this particular area. For the town to retain its character, properties such as Drummond Lodge must be retained and, where necessary, adapted to modern requirements. They must not be demolished to be lost forever in favour of featureless creeping suburbanisation.

Drummond Road, being a narrow unmade lane, is unsuitable for the heavy lorries which would be using it if the extensive redevelopment proposed takes place, involving as it would demolition of the existing house and the construction of the proposed houses together with excavations for foundations as well as installation of all the additional drainage, water, gas and electrical services. It is not wide enough for the weight and width of construction plant that would be required and, if the development is allowed, all the features described would be destroyed by this traffic.

We would submit that the Townscape Character Appraisals were undertaken with the purpose of providing guidance on what should be retained and enhanced, while pointing out clearly the threats which are posed by inappropriate development. The Society is quite clear that the development proposed is unwarranted, inappropriate and in clear contravention of the intentions of the Appraisal, going against the character of this attractive, quiet, residential part of the town. We further suggest that it would be folly to ignore the Appraisal – to do so would render such exercises merely to be a waste of scarce resources and cost.

How is it, therefore, that the applicant can state in the Design & Access Statement that

“This arrangement is in accordance with the local authority guidelines.“ ?

What guidelines are these?

In fact, we would submit that the Applicant’s D & A Statement is seriously flawed and should be discounted when considering this application. For example :

(1) “The intended development form of five, 2 storey dwellings of a traditional design with a contemporary influence is considered appropriate in this location given recent modern developments constructed in the locality.“

We submit this is not so. Five houses of a more or less identical size, design and form in a line fronting Drummond Road would be completely at odds with the variety of design, types, forms and periods of the neighbouring properties,

(2) “ These design factors contribute to the creation of a sympathetic development which has been designed to complement the style and finish of the neighbouring properties.”

Reference to the drawings shows that the proposed development is not at all sympathetic or complementary in style or finish to the neighbouring properties,

(3) “It has been demonstrated that the proposal is in compliance with all relevant Development Plan policies, in particular enhancing the character and appearance of the area, respecting the amenities of neighbouring residents and avoiding harm to highway safety or convenience. There are no material considerations which suggest that the application should be determined otherwise.”

The applicant has manifestly not demonstrated that the proposal is in compliance with Development Plan policies, quite the opposite, as :

Once again, we would refer you to the Townscape Character Appraisal and its description of the character of the Lanes area, so important if the unique character of Swanage is not to be lost.

We trust that these comments will be included in full in the officer’s report so that Planning Board members are fully aware of the depth of opposition to these plans.

We urge you in the strongest terms, therefore, to totally reject this application.

PS I attach the photographs depicting some of the particular features, including Drummond Lodge itself which would be lost if this application succeeded. 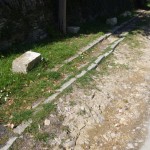 The historic stone way in the verge alongside no2 Drummond Road which would be destroyed by five separate accesses. 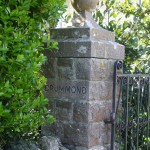 Gate post, part of wall and hedge at the entrance to Drummond Lodge. 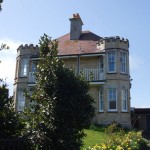 I regret to inform you that yesterdays Planning Board gave outline approval for the demolition of Drummond Lodge and the erection of 5 houses in its place. It also gave approval to he 22 holiday lodges on the Burnbake Campsite.