It is with much sadness that we pay tribute to our past Chairman. Mike joined the Society in 2005, at a time when the Society had drifted from its original objectives as a learned Society, but was thriving socially. Despite his many other interests, many in demanding roles, he was persuaded by the late Moira Cross to succeed her as Chairman, which he did in 2006.

Mike quickly set his stamp on the Society and its Committee, guiding the Society towards its original objectives and becoming a Civic Society. He took an active part in the various consultations shaping the future local plan, with its effect on the local community, and heritage. He also represented the Society on several Partnership groups.

His interest in the built heritage, no doubt originating from his work as an architect on the restoration of London underground stations, which were suffering from wartime damage and post war neglect;  many of them listed buildings.

He took a keen interest in the planning and development process, monitoring the list of planning applications each week. He, exhibiting his architectural expertise quickly developed a rapport with the planning Dept. staff, and was a frequent and respected speaker at the Purbeck District Council Planning meetings, expressing views on behalf of the Society.

Mike negotiated annual discussions with the Planning Manager, and initiated a dialogue with some of the more willing developers. Often modifications were agreed at the formative stages of some major developments, to the benefit of both parties.

He was passionate about ensuring new development is in keeping with our local heritage, whilst accommodating the inevitable change.

Mike was an accomplished chairman, able and well versed in procedural issues, with an ability to resolve the occasional disagreements in committee promptly in his pleasant but firm and fair manner.

He was well organised, and kept his various interests compartmentalised, the occasional conflict of interest was cleverly handled, always upholding his view that heritage and the built environment were extremely important

We all remember his officiating at the winter talks, and his attendance at the summer outings. He was always patient and friendly, quick to give thanks when due, at the same time keeping things firmly on the rails. He inevitably came out with some wise crack which gave rise to a chuckle, and he always made sure that members were kept informed of events at the Railway Circle, and the Town Twinning; two of his other great interests.

I fondly remember many a committee meeting, originally hosted by David & Mary Lloyd at Scarbank, where the pace seemed leisurely but at the same time things got done, with any contentious issues quickly sorted with no animosity, to the good of the Society. Latterly meetings were held at Mike’s house where the coffee pot was on the go from the time of the first arrival, and once Tommy the cat was seated at the table, proceedings commenced. Any late comers were usually required to negotiate his large potted fern to sit as though peering out from a jungle.

In 2014 the Society suffered a down turn, with the retirement of a number of committee members due to age, and for personal reasons. The lack of volunteers to replace them made winding up the Society extremely likely. Mike took firm charge of the situation, doing all that he could to stave off closure. Fortunately the ladies on our current committee came forward to cover the essential roles of organising talks and outings, plus keeping membership records.

During the past year when Mike was undergoing a series of unpleasant treatments, he always maintained his good humour, and maintained a great interest in how the Society was progressing, attending meetings when he felt able; but always keeping in touch via email, guiding and commenting on agendas and minutes up to the last.

Mike was a brave, conscientious, generous, and caring man who set a standard which will be difficult to emulate, he will be sorely missed. 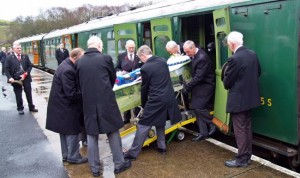 Mike volunteered on the Swanage Railway for 44 years and is pictured here being taken to his funeral in a carriage he had restored himself.