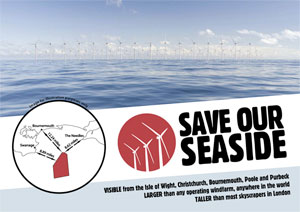 Members will recall that at the AGM, by a large majority, it was agreed that our Society should continue to monitor and if appropriate object to the windfarm that is proposed for Navitus Bay, lying off our coast. Further, members agreed that the writer should continue to represent the society at meetings of the steering group of the Poole and Christchurch Bay Association (PCBA).

I can report that NBDL, the French and Dutch consortium that are proposing to build the wind farm, will present their final proposals at a series of public gatherings during September. So please make a note of the date 17th September, 2pm – 8pm, at St Edward’s Church Hall, Rempstone Road, Swanage, BH19 1AH. There will not be another opportunity to look at the developers’ proposals and make your comments known. Following this series of meetings the developers will make any final amendments to their proposals in an attempt to satisfy you and will present a planning application to The Crown Estates who are responsible for the maritime area lying around our coast and leasing areas of the sea bed to the developers. The final decision will be taken by the Secretary of State (S of S) and we all heave a sigh of relief, or feel very cross; as the case may be. It is understood that the Crown Estates are funding some of the development. Do you think that is correct for such a sensitive subject?

So what are PCBA steering group doing to try to influence the final outcome.

We are very concerned that the visual portrayals that the Developers have been showing at previous meetings, are not acceptable. Though they are to the current industry standards, we believe that those industry standards should be brought in line with the standards being considered by the Scots government following detailed work by Stirling University. These much more realistic images, would make the generators appear to be at least 4 times the size of images produced by the developers. The PBCA chairman has written to the S of S to urge that the industry standard be urgently revised in line with the Stirling University work. We also are preparing our own visuals to give some better understanding of the size of these massive erections. The last thing any of us want would be to have shocks when the built generators do not look anything like the photo montages we have been shown by the developers.

One of our group, (an Ornithologist from Christchurch) is preparing a very detailed report on the anticipated effect on migrating birds passing through Navitus Bay. Rates of bird kill are expected to be high. It is very sad but a disagreement exits between RSPB and the British Trust for Ornithology. RSPB holds that killing some birds is necessary for the better good of the environment; the Trust disagree.

It is reported in a BBC website that windfarms kill more bats than birds because the differing air pressures around the generators cause the bats lungs to collapse; a bird’s skeleton is much more robust. However do bats fly over the sea and if so how far? We have been told that bats do sometimes migrate to the continent and one marked in Purbeck has recently been found in the Isle of Wight. Bats are one of the most protected species in the animal kingdom. Bats will follow insects, their food; sailors report that they can find swarms of insects on their boats way out to sea as the insects also migrate and hop on board for a rest. We will continue to seek facts about insects and bats.

An excellent paper has been written by another PCBA steering group member who is the commodore of Christchurch Yacht Club in which he discusses the problems that will arise for those navigating through the site and perhaps more importantly trying to rescue sailors in trouble in the windfarm. The sea off our coast is one of the busiest areas for shipping in the world.

One of our principal industries in this area is Tourism. Our steering group believes it will damage the industry; developers believe the windfarm will be a tourist attraction, what do you think? Please make your views known.

We are very concerned that some environmentalists are putting out a great deal of dubious information to try to strengthen their case. For example, global warming has been pretty static for about 15 years now, and who knows which way it will go in the next 15 years, up or down? The world’s climate has always changed and will always change in one way or another; some of the environmentalists are real gloom merchants and why should they know more than anyone else? They are very concerned about carbon, but all living plants take in carbon; perhaps it is felling rain forests that has caused increases in carbon in the atmosphere, it certainly has not helped. There was a lady shouting out on Swanage front that “wind energy is free”. I’m afraid it isn’t. All of our domestic fuel bills are going to rise as a direct result of wind energy use and our national budget is going to heavily subsidise the construction costs and if those government subsidies were to be withdrawn NBDL would not proceed any further with their planning application. One way or another we are going to pay for the luxury of a windfarm that will only produce the amount of electricity promised by the developer when the wind speed is absolutely right; the rest of the time our energy requirements will have to be backed up by old fashioned carbon producing power stations and we are not building any new units at the moment.

What are other countries up to, they use electricity as well? The renewable electricity industry in Germany has all but collapsed as the government has withdrawn subsidies and started work to build 20 new conventional power stations. Denmark has become quite disenchanted about windfarms. France will of course sell us power, if they have it to spare, but it will be produced by nuclear stations. China is to build new conventional stations at the rate of one every week, and so I could go on. What we need is for the UK government to set up a sensible study group to tell us what is true and what is false and there is not much sign of them doing that. While we sit on our hands and do little, UKIP has produced an energy policy having considered all power production and decided against wind energy, the only UK political party to produce an energy policy. I wonder if the other parties will now follow suit?

NBDL, the developer, has not yet produced its Noise Report; but it is unlikely to contain any medical evidence. Bournemouth Council is concerned and will commission a suitable report. The noise regulations for the wind industry in the UK were written by the wind industry. It is believed that there was no medical input to that report. Its value must be questionable. The limited research done to date has shown that a particular type of noise, which travels well over water, and can penetrate buildings, known as” Low Frequency noise” and “infrasound”, has been responsible for driving susceptical people from their homes. Throughout the world, the consequential noise syndrome has the same sort of symptoms. i.e. raised blood pressure, sleep deprivation ,tinnitus, panic attacks and vertigo. Suffers from migraine and motion sickness are especially prone.

Medical advice is required for the simple reason that health professionals understand health matters better than acousticians. In essence, Doctors should set the noise limits and then acousticians can decide where the wind generators can be located.

Thanks for reading David Gerry

Please visit St Edwards Hall on the 17th September and when you get home write to the following with your views. If you wrote before then I’m sorry but you must write again, because the plans have been changed and need new comments from you.