THE PURBECK SOCIETY
www.purbecksociety.co.uk
Affiliated to the Campaign to Protect Rural England (CPRE)

These three proposed developments proposed for the Osborne Road/Townsend Road/Cobblers Lane area follow on from that application granted on appeal for PA 6/2010/0302, Land adjacent to Rotary Cottage allowed on Appeal.
While these are separate applications, the Society takes the view that the overall impact that the three proposals would have on the area, should be considered in relation to each other, together with that of the earlier, allowed, Rotary Cottage scheme.

PA 6/2012/0526
While the Society would regret the loss of the present and very pleasant space afforded by the garden adjacent to no 21 Osborne Road, and can sympathise with the comments of the neighbour living in no.20, on balance we have no objection to the proposed development, which we consider to be entirely in keeping with the majority of, and the older part of, Osborne Road. The terrace of four houses complements the existing terraces in the road and is arguably more appropriate to the streetscape than the post war developments at the road’s western end. The traditional design, proportion and use of materials, respects the character of the street. Keeping the existing stone wall in the front is a nice touch, presumably with paved access to the front doors of the new houses. The car parking off the single access to the rear of the development would seem to work well.
However, the overall effect is a reduction of open space in this area as the site backs on to Sea Mist, the subject of Applications 6/2012/0495

PA 6/2012/0495
Having now had the opportunity to visit the site and appreciate fully its shape, topography and relationship to neighbouring properties, the Society wishes to object strongly to the application to build four houses on this site. I trust it is not too late to register our objection to this application, as we consider it to be gross over-development for this small awkwardly shaped site, impacting severely on the character of Cobblers Lane and the neighbouring properties in Osborne Road.
There would be loss of significant trees and virtually all the green space of the present attractive garden of Sea Mist would be lost. The design of the houses themselves, looks to be, at best, mediocre; being poorly proportioned, lacking in character and out of context with neighbouring properties – even the more modern ones. Additionally, two storey houses are out totally out of scale and out of keeping with the lane, being too high. They would also restrict sunlight to the gardens of houses in Osborne Road and give problems of privacy and overlooking. Furthermore, there is little indication given on the drawings as to how the landscaping would be handled on this difficult site so close to properties in Osborne Road.
Our main objection therefore is on the grounds of over development, which when considering the actual site, is surely only big enough to allow a maximum of two houses and we suggest that these should be restricted to a maximum of 1.5 storeys. Two houses on this site would not cause such significant damage to Cobblers Lane, especially if both were sited to the south western part of the site and both were accessed from the one point. The problem of overlooking and privacy to the neighbouring houses would also be lessened.
As proposed in this application, the character of Cobblers Lane would be despoiled by the additional accesses from it. From the comments of DCC Highways, it appears the lane would have to be made up, possibly with suburban style pavements and kerbs, be realigned, widened and straightened (and provided with street lights?) giving it an entirely alien character to what is presently an attractive little lane with grass verges retained here and there by small scale kerb stones.
Cobblers Lane marks the change from the urban part of the town, hereabouts of Osborne and Townsend Roads, to the open country and old quarries on the rising ground to the south. Indeed, we understand that part of the Sea Mist site includes old quarry workings. Further encroachment into this landscape must be resisted, approving this planning application and the changes that would result to Cobblers Lane and the neighbourhood would set a dangerous precedent.
We submit that this application must be refused.

PA 6/2012/0639
Once again our principal concern is over-development of the site. However, we are impressed with the design of the proposed houses, which we note will have their access from Townsend Road. Their scale and height seem appropriate compared to the neighbouring houses of Townsend Road, the form and layout of House 2 is particularly interesting. However, we would be opposed to any increase of the radius of the proposed wall at the junction of Townsend Road and Cobblers Lane, as it is important that the width of the lane at this point should not be significantly increased.
We note from the Design & Access statement that
“…Stone boundary walls are modelled to define entrances for people and cars, enclose garden space and rise to create the gable end of the northern property against Cobblers Lane…”
However, the drawings suggest this wall, apart from a stone plinth, is in coloured render. We would suggest, therefore, that the wall bounding House 2 to Cobblers Lane should be in Purbeck Stone wrapping round from the garage, to the height of its garden wall and side gate – not just a plinth. Above that height the rest of that elevation could satisfactorily be rendered. In this way we feel that the contemporary design approach would not be compromised but the character and context of the development’s setting would be enhanced.
On balance, especially if this suggestion could be incorporated, we would not object to this proposal.
In summary, the Society would be content to support application (6/2012/0526) for the terraced houses in Osborne Road and the two houses in Townsend Road (6/2012/0639), with the suggestion above and providing the essential character of Cobblers Lane is retained. Overall we feel that approval of these two applications could contribute to the character and quality of the area. However, for the reasons outlined above we remain utterly opposed to PA 6/2012/0495, the proposed redevelopment of Sea Mist and have residual concerns as to how the Rotary Cottage development at the top of the lane may turn out.

Some photographs of the above mentioned sites/properties. 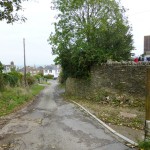 View down Cobblers Lane, Sea Mist on the extreme left, showing its informal and rural character 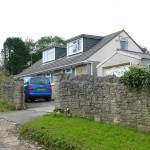 Sea Mist, where the applicant wants to demolish and build 4 houses, three of two stories and one of 1.5 stories similar to Sea Mist 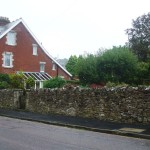 The site for the proposed terrace development of 4 houses 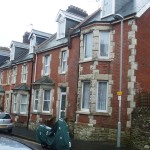 The existing terraces in Osborne Road, which are being used as the model for the proposed terrace of 4 houses 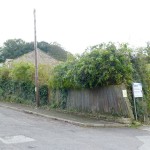 Corner of Cobblers Lane and Townsend Road, our concern is that the corner should not be greatly widened on the grounds of ‘sight lines’ 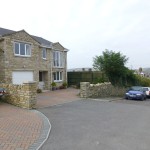 Townsend Road, site for the 2 ‘contemporary’ houses on the left next to the house shown on the ground behind the shrubbery 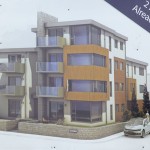 The replacement development on the site of the old Cumberland Flats on the corner of Cranborne and Ilminster Road.